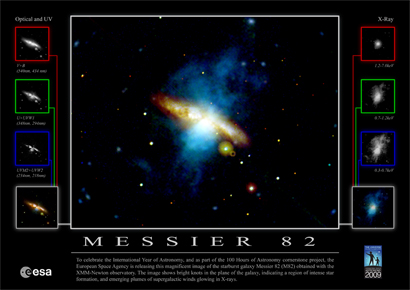 To celebrate the International Year of Astronomy, and as part of the 100 Hours of Astronomy cornerstone project, the European Space Agency is releasing this magnificent image of the starburst galaxy Messier 82 (M82) obtained with the XMM-Newton observatory. The image shows bright knots in the plane of the galaxy, indicating a region of intense star formation, and emerging plumes of supergalactic winds glowing in X-rays.

M82 is located 12 million light years from us, in the Ursa Major constellation. It is the prototypical, and closest, starburst galaxy. In this type of galaxy the rate of star formation, and death, is about 10 times more than in our Galaxy, the Milky Way. The XMM-Newton optical and ultraviolet view of M82 – the bright plane of the galaxy – clearly depicts a region of intense star formation. The massive stars that are formed here evolve very quickly and explode as supernovae. Winds from these supernova explosions make their way through the dust in the disk of the galaxy and emerge as plumes of million degree gas glowing in X-rays. Astronomers believe that the burst of star formation in M82 was triggered about 100 million years ago during a close encounter with a neighbouring galaxy, M81.

A dedicated observation of M82 was made with XMM-Newton on 3 April 2009 during the 100 Hours of Astronomy. This, combined with previous observations, gave a total of 52.5 hours of XMM-Newton time for M82, and produced this special, celebration image.

XMM-Newton simultaneously collects data in different X-ray energy bands, and at optical and ultraviolet wavelengths. To create this image false colours are used to distinguish emission in different wavelengths. The X-ray image of M82 (lower right) is a composition of the three X-ray bands (1.2 to 7 keV, 0.7-1.2 keV and 0.3-0.7 keV - shown in the right-hand column). The optical-ultraviolet image is constructed from images obtained with three optical/ultraviolet filters (V+B, U+UVW1 and UVM2+UVW2 - shown in the left-hand column.) The combined optical-X-ray image is a testament to the power of multi-wavelength astronomy showing the vastly different views of a celestial object when viewed at different wavelengths.

Since it was launched, in December 1999, XMM-Newton has consistently demonstrated its role as one of the most important astronomical observatories of our times.

Editor's note: A small artefact appears in this image. The small “smoke ring” near the bright star below the galaxy disk is a known effect due to light being scattered within the optical monitor detector window.

‘Around the World in 80 Telescopes’ – webcast archive online