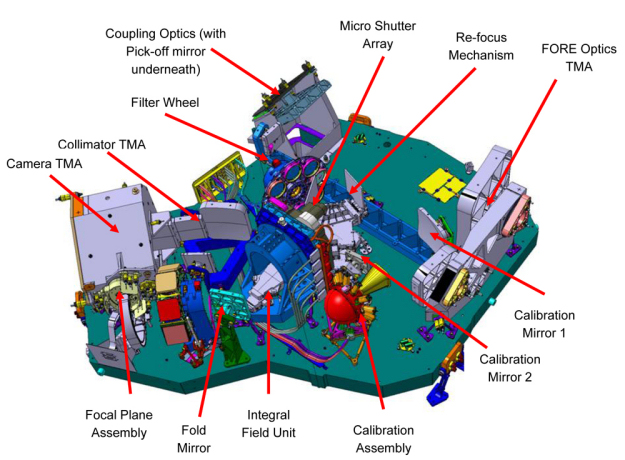 The NIRSpec optical design is a highly modular system, featuring 3 three-mirror-anastigmat optics assemblies, and six primary opto-mechanical systems, which can be integrated, aligned and tested independently.

The three optics assemblies are:

Coupling & Fore optics which re-image and demagnify, with almost zero optical distortions, the huge 3 x 3 arcmin fraction of the curved telescope focal surface allocated to NIRSpec onto its first smaller image plane, where the Micro-Shutter Array (MSA) lies. The Coupling & Fore optics also create a (nearly) collimated beam where the filter wheel is positioned, in this way minimising the chromatic aberrations;

From the MSA plane, the optical beam is injected into the spectrograph optics made up of the Collimator and Camera optics.

The Collimator optics transform the divergent beam into a collimated one impinging onto the grating wheel mechanism where the dispersive optical elements are housed;

The spectra then reach the Camera optics, where they are focussed onto the detector focal plane and at the same time further de-magnified with a plate scale of 100 milliarcsec per pixel (18 micron in size).

The six opto-mechanical elements are:

a Micro-Shutter Array, composed of four independent quadrants, each one housing a Micro Electro-Mechanical Systems (MEMS) array, made up of almost a quarter of a million shutters which can be addressed independently to obtain any pattern of opened/closed 'slits'.

a filter wheel mechanism, houses two broadband filters, four long-pass filters, one clear aperture and a pupil alignment reference / calibration mirror that serves as an instrument shutter. Filters substrates are in CaF2 or BK7 with clear aperture diameter of 66 mm and a thickness of 10 mm. A support structure provides the structural interface to the optical bench via three isostatic mounts and contains the torque motor, the central ball bearing and the sensors to monitor the wheel position and temperature. A spring-operated ratchet mechanism, which holds the wheel in place with in an accurate and repeatable fashion. provides additional torque in order to minimize power consumption of the motor;

a refocusing mechanism, which compensates for possible telescope focal length changes during its lifetime and properly re-images its focal surface onto the Micro-Shutter Assembly. This mechanism essentially consists of two flat Zerodur mirrors in a penta-prism arrangement, which is largely insensitive to possible misalignments. The mechanism is mounted on a Titanium baseplate, which can move along the refocusing direction, by means of a geared stepper motor in steps of 10 microns; the mirrors can compensate a change in telescope focus of up to +/- 3 mm by means of two Hall effect sensors which monitor the mirrors’ movement;

a grating wheel mechanism which houses one CaF2, low resolution (R=100) double-pass prism; three medium resolution gratings (R=1000) and three high resolution gratings (R=2700), and an imaging mirror for target acquisition purposes. The gratings and the mirror are made from gold-coated Zerodur, a glass ceramic with extremely low coefficient of thermal expansion.

and a calibration sphere, or internal calibration assembly, which is used to quantify any spectral, radiometric and geometric distortions. It consists of an integrating sphere fed by eleven light sources with broadband and spectral line filters. Each light source uses a bulb-enclosed Tungsten filament, operated at a temperature of ~ 1800 K. The main purpose of the integrating sphere is to provide an homogeneous beam at its exit aperture which is located in a pupil plane. By means of six mirrors, three of which belong to the nominal optical train, the assembly exit aperture is re-imaged onto the MSA plane in a telecentric way. The broadband filters are identical to the order-sorting filters in the filter wheel, which are used in combination with the instrument gratings. The spectral line filters feature multiple transmission lines within a spectral octave. Temperature monitoring with an accuracy of better than 0.1 K will be needed to calibrate the dependence of the peak positions versus temperature. Overall NIRSpec needs to achieve an accuracy of 10% for the absolute radiometric calibration and of 1/8th of a spectral resolution element for the wavelength calibration.