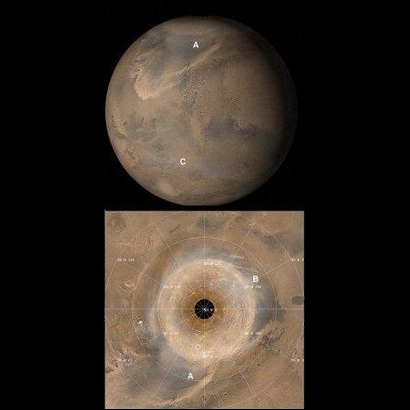 Mars Orbiter Camera (MOC) shows dust storm activity on Mars remained relatively high during the past week. The large (sub-regional) south polar storm continued for several days and then abruptly partitioned into a number of small, local events scattered throughout the antartic. By the end of the week a thin dust haze, the remnants of the south polar storms, enshrouded the entire south polar region reaching as far north as 500S latitude. Concurrent with the south polar dust activity, another 'polar cold' front developed in and traversed NW Acidalia, spawning one of the largest northern hemisphere dust storms observed by MOC in 2002. This event persisted for several days, traveling eastward into Deuteronilus Mensae and southward following the low lying topography into Chryse/Xanthe Terra (see 'A'). No dust activity was observed to cross the equator. Additional northern storm activity continued along the north polar cap edge in Utopia and Arcadia (see 'B').

Water-ice clouds continue to become more frequent, especially near or over all the major volcanoes, forming a thin cover at southern mid-latitudes (see 'C'). Under some conditions, dust storm activity warms the atmosphere and inhibits water condensation. However, as noted last week, present atmospheric temperatures and water distributions (probably in the form of diurnally-precipitated frosts that sublime each morning), combined with the slightly dusty atmosphere, appear to favor nucleation of mid-atmospheric (at or slightly above the tropopause) ice clouds.