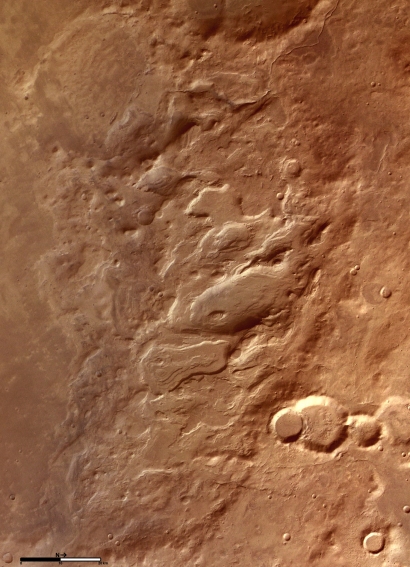 This colour image was created from the nadir and three colour channels of the High Resolution Stereo Camera (HRSC). The image shows a portion of the northern region of the Hellas basin at 68° E longitude and 29° S latitude. It was taken during orbit 488 with a resolution of 18.3 metres per pixel. North is to the right.

The Hellas basin is located in the Martian southern hemisphere, and is actually a giant impact crater. It is about nine kilometres deep and has a rim diameter of about 2300 kilometres, which makes it one of the largest impact craters in our Solar System. The basin floor is frost-covered in the Martian winter and appears bright even in Earth-based telescope observations.

This HRSC image show the basin rim, which is strongly dissected by elliptical and concave features, running north-west to south-east, as well as several small impact craters. The elongated smaller basins have most likely been shaped by wind erosion ('aeolian' processes). A small valley network in the north-western part of the region suggests fluvial activity, meaning possibly action by water.