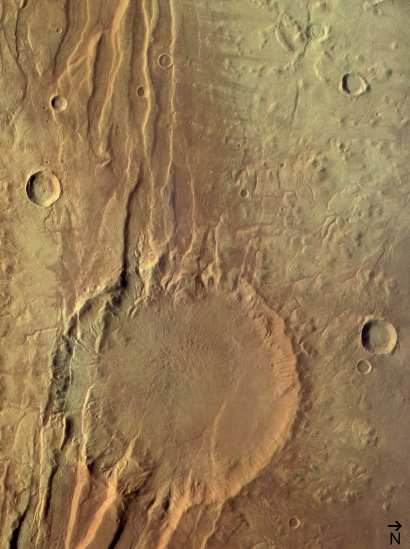 The feature is situated at approximately 35°-40° North and 220°-230° East, about 1000 kilometres north of the large Olympus Mons volcano. For practical use on the internet, the image has been reduced in resolution - the data originally obtained from orbit at an altitude of 765 kilometres (orbit 37) and 1240 kilometres (orbit 143) have a resolution of 30 metres and 50 metres per pixel respectively.

Acheron Fossae marks the northern edge of the Tharsis plateau. It is part of a network of extensional fractures that radiates outward from their central focus in the Tharsis 'bulge', a huge area of regional uplift where intensive volcanic activity occurred.

Curved 'faults' were caused in the process of this uplift: cracks in the crust formed when the hot material rising from deep in the mantle of Mars pushed the overlying 'elastic' lithosphere (surface layers of rock) upward. When the distorting tensions became too strong, the brittle crust on top of the lithosphere broke along zones of weakness.

In geological terms, this is called a 'horst and graben' system. When several parallel faults form, the block of crust between them drops down, forming a 'graben'. At Acheron, an almost classical example of parallel fault-bounded grabens has formed, dissected by remnants of the pre-existing topographical heights, the 'horsts'. The Acheron Fossae region can be compared to rift zones on Earth, where continental plates spread apart, as is known from the Kenyan Rift Valley in eastern Africa.

This image, with the large 55-kilometre diameter crater, was taken about 250 kilometres west of the image "Deep Faults in Acheron Fossae". It shows how the rifting crosses the older impact crater with at least three alternating horsts and grabens.