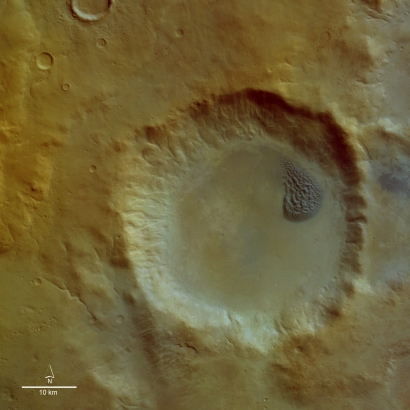 The above image, taken by the High Resolution Stereo Camera (HRSC) on board ESA's Mars Express spacecraft, shows a Martian crater with a dune field on its floor.

The image was taken during orbit 427 in May 2004, and shows the crater with a dune field located in the north-western part of the Argyre Planitia crater basin. The image is centred at Mars longitude 303° East and latitude 43° South. The image resolution is approximately 16.2 metres per pixel and has been created from the HRSC's nadir (vertical view) and three colour channels.

The crater is about 45 kilometres wide and 2 kilometres deep. In the north-eastern part of this crater, the complex dune field is 7 kilometres wide by 12 kilometres long. In arid zones on Earth, these features are called "barchanes", which are dunes having an asymmetrical profile, with a gentle slope on the wind-facing side and a steep slope on the lee-side. The dune field shown here suggests an easterly wind direction with its steeper western part. The composition of the dune material is not certain, but the dark sands could be of basaltic origin.