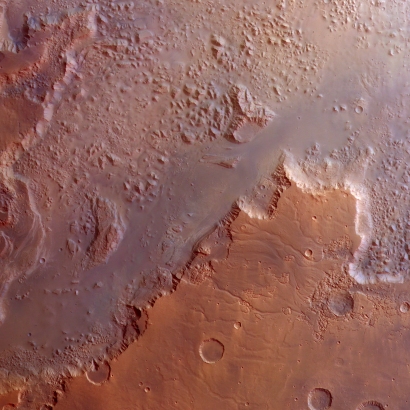 This image, taken by the High Resolution Stereo Camera (HRSC) on board ESA's Mars Express spacecraft, shows the southern part of Valles Marineris, called Eos Chasma. It was taken during orbit 533 in June 2004, and is centred at Mars longitude 322° East and latitude 11° South. It was created from the HRSC's nadir (vertical view) and three colour channels. The image resolution is approximately 80 metres per pixel.

Between surrounding plains and the smooth valley floor, a height difference of about 5000 metres has been measured. The plain to the south, above Eos Chasma, is covered by several impact craters with diameters of around 20 kilometres and drainage channels. To the east on this plain, isolated regions with cracked surfaces become more prominent. The direction of flow of the drainage channels in this area of the plain is ambiguous, as the channels to the north-east drain towards the south-east, and those in the south-west normally flow to the north-west.

The northern part of Eos Chasma's valley floor is a rough area with angular hills reaching almost 1000 metres. In contrast, the southern part reveals a smooth topography with distinct flow structures. In some areas of the southern slope, at least two terrace levels can be observed. Some haze in the valley hints at the presence of aerosols (airborne microscopic dust or liquid droplets).