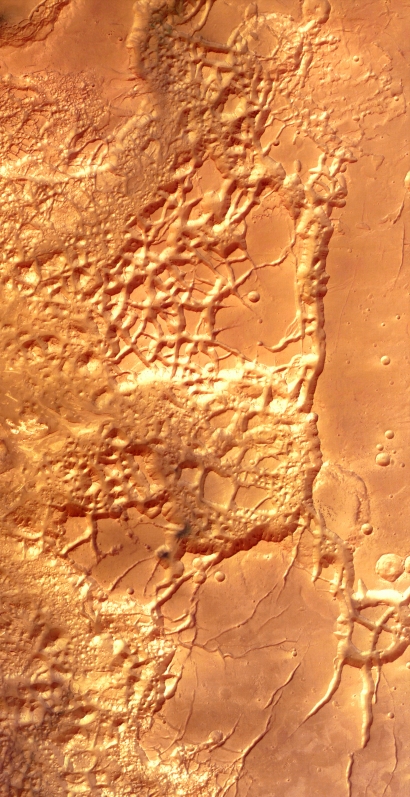 This image, taken by the High Resolution Stereo Camera (HRSC) on board ESA's Mars Express spacecraft, shows the chaotic terrain of the Aureum Chaos region on Mars.

The HRSC obtained this image during orbit 456 with a resolution of approximately 25 metres per pixel. The scene shows an area located at about 3° South and 335° East.

Aureum Chaos is located in the eastern part of Valles Marineris, south-west of the 280 kilometre-wide impact crater Aram Chaos. Like this impact basin, both regions are two examples of the chaotic terrain contained in this part of the Valles Marineris.

As the name chaos suggests, this terrain is characterised by randomly oriented, large-scale mesas and knobs that are heavily eroded and dominate the area. As seen in this image, these mesas range from a few kilometres to tens of kilometres wide.

Several interesting features that can be seen in the image are:

The history of Aureum Chaos is complex. It appears that this basin was filled with sediment and then experienced the formation of chaotic terrain. It is thought that this extremely rough terrain is caused by collapse of the surface due to the removal of subsurface ice, magma or water.