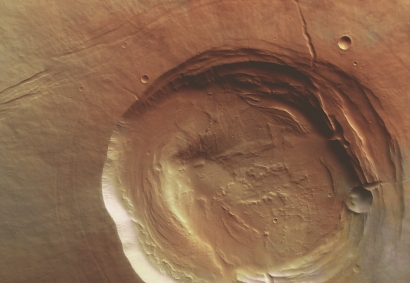 This image, taken by the High Resolution Stereo Camera (HRSC) on board ESA's Mars Express spacecraft, shows the Biblis Patera volcano, located in the western part of the Tharsis rise on Mars.

The HRSC obtained this image on 8 November 2004 during orbit 1034 with a ground resolution of approximately 10.8 metres per pixel. It shows the region of Biblis Patera at approximately 2.0° North and 236.0° East. North is to the left.

The bowl-shaped depression (the caldera) may have been formed as the result of collapse of the magma chamber during eruptions of the volcano. The caldera has a diameter of 53 kilometres and extends to a maximum depth of roughly 4.5 kilometres.

The morphology of the caldera suggests that multiple collapse events have occurred. The radial depressions and faint concentric circles on the flanks of the volcano are most likely faults associated with the formation of Biblis Patera.