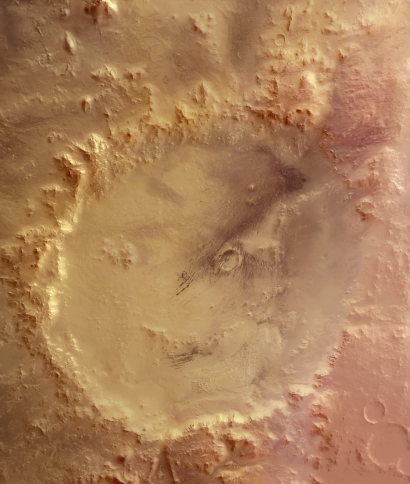 This image shows the Galle crater, an impact crater located on the eastern rim of the Argyre Planitia impact basin and south west of the Wirtz and Helmholtz craters, at 51° South and 329° East on Mars. North is up.

The image of the 230 km diameter impact crater is a mosaic created from five individual HRSC nadir and colour strips, each tens of kilometres wide. The HRSC images of the Galle crater were obtained during orbits 445, 2383, 2438, 2460 and 2493 with a ground resolution ranging between 10-20 metres per pixel, depending on location within the image strip.

A large stack of layered sediments forms an outcrop in the southern part of the crater. Several parallel gullies, possible evidence for liquid water on the Martian surface, originate at the inner crater walls of the southern rim.

The crater interior shows a surface that is shaped by aeolian (wind-caused) activity as seen in numerous dunes and dark dust devil tracks that removed the bright dusty surface coating.

Crater Galle, named after the German astronomer J.G. Galle (1812-1910), is informally known as the happy face crater. The face was first pointed out in images taken during NASA's Viking Orbiter 1 mission.

This near true-colour scene has been derived from three HRSC colour and nadir channels gathered during five overlapping orbits.