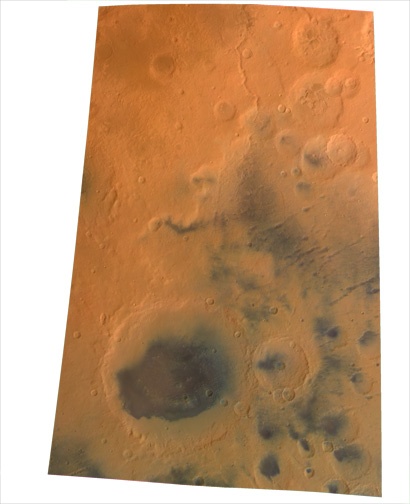 The large impact crater Baldet can be seen in the lower part of this image obtained by the HRSC onboard Mars Express. The crater is situated in the north-east of Terra Sabea, on the northern edge of Syrtis Major Planum, close to where the old and cratered highlands of Mars's southern hemisphere meet the younger and smoother planes of the northern hemisphere. Crater Baldet has a diameter of 180 km and is centred at 65.4° E, 22.8° N (USGS MC-13 quadrangle).

Across the crater floor, dunes can be seen that are formed by loose sand picked up by winds blowing over the crater floor's surface. The dunes show up as the darker coloured formations east of the crater's centre. Some dunes on Mars have settled into stationary features. This is likely not yet the case for the dunes in this crater and their appearance is therefore expected to change with time.

Crater Baldet overlaps the rim of the larger crater Antoniadi, which lies to the west, just outside this image on the left. Crater Antoniadi is more than twice as big as Baldet with a diameter of 394 km and its centre lies at 60.8° E, 21.3° N. It is named after Eugène Michel Antoniadi, a Turkish-born Greek astronomer (1870-1944).

In the centre at the top of the image the southern tip of the Huo Hsing Vallis channel (after the Chinese name for Mars) can be seen. The roughly 340km long channel is thought to have formed by water flowing in the planet's distant past.

Crater Baldet is named after the French astronomer Fernand Baldet (1885-1964).

Image created by ESA Science from data contained in the Mars Express public archive. The selected colour scheme is an interpretation based on the original raw data.

*Note: some of the image versions provided are very large (4776 x 5877 pixels) and may take some time to open.