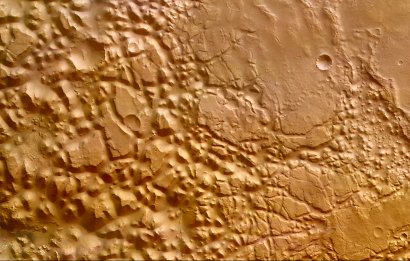 This image, taken by the High Resolution Stereo Camera (HRSC) on board Mars Express, shows Iani Chaos, a region east of Valles Marineris characterized by a disrupted and chaotic appearance, similar to other chaotic terrain on Mars.

The HRSC obtained this image during orbit 945 with a ground resolution of approximately 13.0 metres per pixel. The image shows the region of Iani Chaos, lying at approximately 340.6° East and 0.7° South. North is to the right.

Iani Chaos is one of many regions east of Valles Marineris characterized by disrupted or chaotic terrain. The morphology of this terrain is dominated by large-scale remnant massifs, which are large relief masses that have been moved and weathered. These are randomly oriented and heavily eroded.

To the south (left) in this image, these mesas, which appear as flat-topped hills, range from less than one kilometre to roughly 8 kilometres wide, with a maximum relative elevation of approximately 1000 metres.

The relatively flat region in the north-west (upper right) of the image exhibits a number of faint, circular depressions. These depressions, along with the remnant massifs, may have been formed by collapse of the surface due to the removal of underlying material, for example ice or water.

Scientists believe that Iani Chaos was the source of the fluids thought to have created Ares Vallis, the roughly 1500-kilometre-long valley that extends to the north-west in the direction of Chryse Planitia.

The colour scene has been derived from the three HRSC-colour channels and the nadir channel. Image resolution has been decreased for use on the internet.