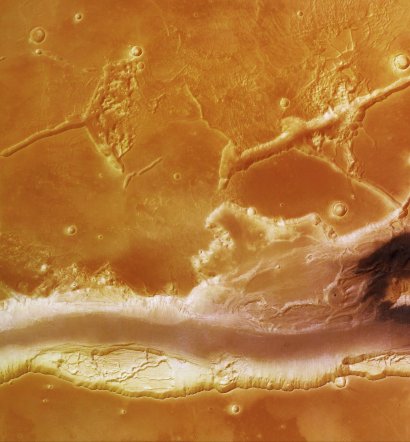 This image was taken by the High Resolution Stereo Camera (HRSC) on board Mars Express, during orbit 1429 at a ground resolution of approximately 29 metres per pixel. It shows the southern branch of Kasei Valles, one of the biggest outflow channel systems on Mars. North is up.

The Kasei Valles region lies approximately between latitude 21° and 28° North at 292.5° East longitude. It connects Echus Chasma, an elongated depression which lies to the south, with the plain Chryse Planitia which lies to the east.

Kasei Valles has a width of roughly 500 kilometres and, if Echus Chasma is included, extends for approximately 2500 kilometres. As one of the biggest outflow channel systems on Mars, Kasei Valles was probably formed by gigantic flood events and later additionally shaped by glacial activity.

The two main branches (the south branch in this picture, and the north branch under the related images) of Kasei Valles extend approximately south-west to north-east and exhibit a depth of 2900 metres. Between the two branches lies Sacra Mensa, a flat-topped prominence with cliff-like edges.

The southern branch of Kasei Valles and part of Sacra Mensa, with its 1- to 2-kilometre-deep graben system, Sacra Fossae, are shown in this image. The terraces are up to 30 kilometres wide, located at the base of the walls on both sides of the valley branch.

The colour scene was derived from three HRSC-colour channels. Image resolution has been decreased for use on the internet.