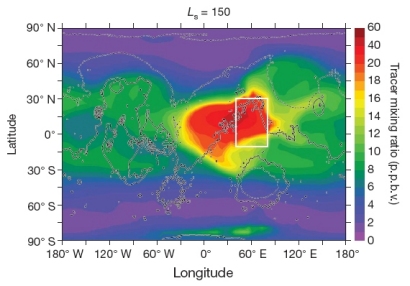 This map shows the column-averaged mixing ratio of methane in parts per billion by volume (p.p.b.v) as derived from a global climate-chemical model of Mars. The levels are for a solar longitude LS of 150° corresponding to late northern summer/southern winter. A local methane source was included, marked by the white square, active for only 120 Martian days around LS=150°, or LS=120°-183°.

The amount of methane released from the source was set to balance the global loss integrated over the Martian year assuming an atmospheric lifetime for methane of about 200 Earth days. This lifetime is shorter than would be expected from currently understood chemical processes by a factor of about 600.

Under these conditions the global model is able to produce the local enhancement and variation in the methane concentration recently reported by Mumma et al. (2009).

Simulated levels of methane in the Martian atmosphere