Transport of water vapour in the Martian atmosphere (annotated)

Transport of water vapour in the Martian atmosphere (annotated) 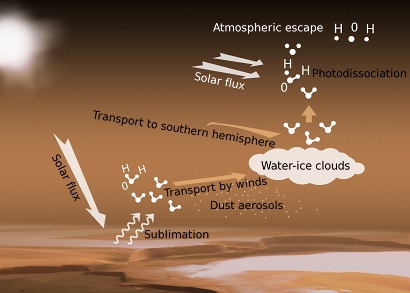 New analysis of data sent back by the SPICAM spectrometer on board ESA's Mars Express spacecraft has revealed for the first time that the planet's atmosphere is supersaturated with water vapour. This surprising discovery, reported in Science by Maltagliati et al (2011), has major implications for understanding the Martian water cycle and the historical evolution of the atmosphere.

As illustrated in this schematic diagram the water cycle in the atmosphere of Mars can be described as follows: