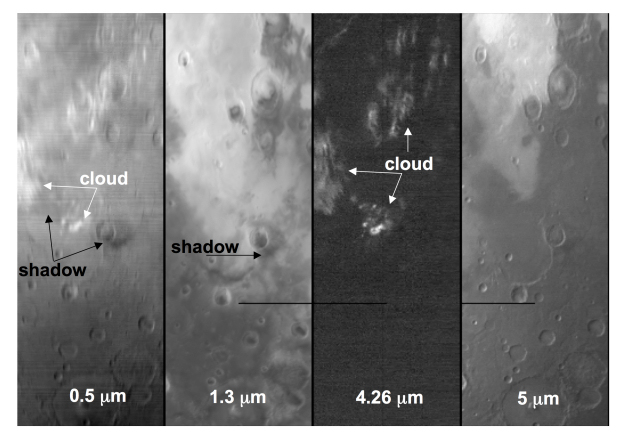 Clouds are an important feature in the atmosphere of Mars. This image composite shows carbon dioxide (CO2) ice clouds, detected for the first time by the OMEGA instrument aboard ESA's Mars Express in late June 2004.

The clouds imaged by OMEGA can reduce the Sun’s apparent brightness by up to 40 per cent, which means that they cast quite a dense shadow. This has a noticeable effect on the local ground temperature. Temperatures in the shadow can be up to 10°C cooler than their surroundings, and this in turn modifies the local weather, particularly the winds.

Since the CO2 clouds are mostly seen in equatorial regions, the OMEGA team believes that the unexpected shape of the clouds and large size of their ice crystals can be explained by the extreme variations in daily temperature that occur near the equator.