Solar wind shaping the magnetospheres of Venus, Earth and Mars

Solar wind shaping the magnetospheres of Venus, Earth and Mars 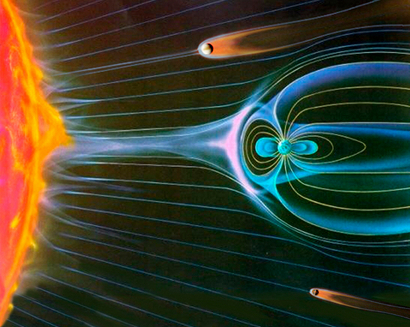 This artist's impression shows how the solar wind shapes the magnetospheres of Venus (shown with a brown tail, closer to the Sun), Earth (shown in blue) and Mars (also shown in brown). Venus and Earth are similar in size; Mars is about half their size. Venus is closer to the Sun, at roughly 0.7 AU (Astronomical Unit) while Earth is located at 1 AU, and Mars at around 1.5 AU. Unlike Venus and Mars, Earth has an internal magnetic field which makes its magnetosphere bigger. The lines coming out of the Sun symbolise the propagation direction of the solar wind.

This illustration is not to scale.