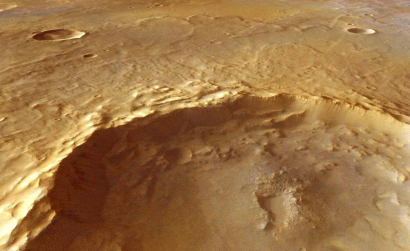 The large 25 km-diameter crater in the foreground of this High Resolution Stereo Camera (HRSC) perspective view has excavated rocks which have been altered by groundwater in the crust before the impact occurred. Using OMEGA (Visible and Infrared Mineralogical Mapping Spectrometer) on ESA's Mars Express and CRISM (Compact Reconnaissance Imaging Spectrometer for Mars) on NASA's Mars Reconnaissance Orbiter (MRO), scientists have identified hydrated minerals in the central mound of the crater, on the crater walls and on the large ejecta blanket around the crater. Hydrated minerals were found in 175 locations associated with other nearby craters in the Tyrrhena Terra region of Mars.