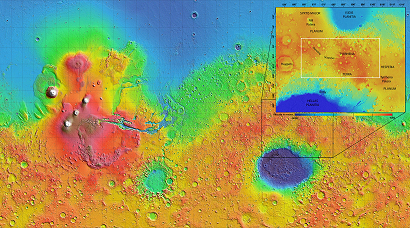 The 1000 × 2000 km area region of Tyrrhena Terra (outlined by the white box in the inset) sits between two regions of low altitude – Hellas Planitia and Isidis Planitia – in Mars' southern hemisphere, as shown in this global topography map. Hydrated minerals were found in 175 locations associated with impact craters in Tyrrhena Terra, such as inside the walls of craters, along crater rims, or in material excavated by the impact. Analysis suggests that these minerals were formed in the presence of water that persisted at depth for an extended period of time.