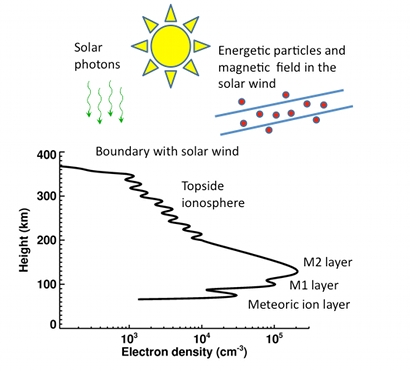 The main features and forcings associated with the dayside ionosphere on Mars are depicted in this figure.

Rather than being uniform throughout, the Martian ionosphere has been found to have a stratified structure, with two main layers. The highest electron densities are found at an altitude of about 140 km, (indicated by M2) where extreme ultraviolet light from the Sun ionises the neutral atmosphere. Electron densities above this layer generally decrease with increasing altitude. A secondary layer (labelled as M1), which occurs at approximately 120 km, is produced by 'soft' X-rays from the Sun and associated impacts with energetic electrons.

The meteoric ion layer is attributed to meteoroid ablation.

New views of the Martian ionosphere