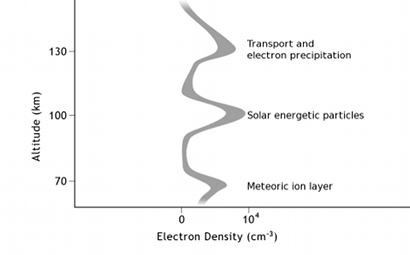 The main features and forcings associated with the night-side ionosphere on Mars are depicted in this figure. Without sunlight to split atmospheric atoms and molecules into ions and electrons, the night-side ionosphere of Mars is very different from the dayside. This figure illustrates some of the findings from studies of the night-side ionosphere obtained with the Mars Express Radio Science experiment on Mars Express. In the early evening, electron densities were found to decrease with time after sunset, consistent with the theory that ionospheric plasma was supplied by transport from the sunlit dayside. This trend ceased about two hours after sunset, when the Sun was well below the horizon. Deeper into the night, peak altitudes of 130-170 km were measured, consistent with plasma production by impacts from electrons travelling down magnetic field lines - a process known as electron precipitation. During solar energetic particle events, plasma densities were enhanced at low altitude and peak altitudes could be much lower than usual, at about 90 km. The meteoric ion layer is attributed to meteoroid ablation.
View »
4-Oct-2022 16:07 UT

New views of the Martian ionosphere