Ozone production over the southern winter pole on Mars

Ozone production over the southern winter pole on Mars 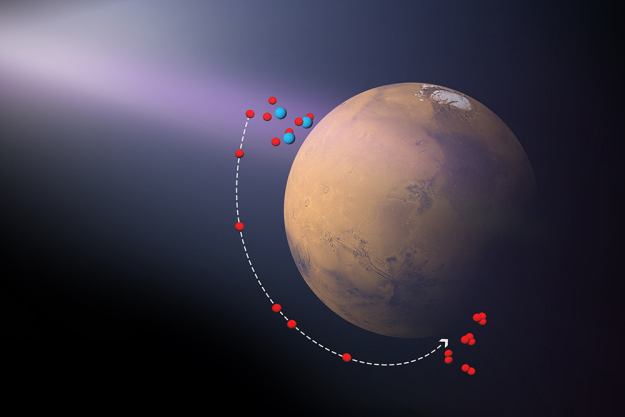 Three separate ozone layers, each with their own characteristics, have been detected in the Martian atmosphere, by Mars Express. By comparing spacecraft data with computer models, scientists have found an explanation for how the layer that appears over the southern winter pole occurs.

It seems that the observed polar ozone layers are the result of the same atmospheric circulation pattern that creates a distinct oxygen emission identified in the Martian polar night.  This circulation takes the form of a huge Hadley cell in which warmer air rises and travels poleward before cooling and sinking at higher latitudes. (Earth's atmosphere has two Hadley cells between the equator and the subtropics.)

Oxygen atoms produced by the ultraviolet photolysis (splitting) of CO2 (shown in blue [carbon] and red [oxygen] in this image) in the upper branch of the Hadley cell eventually recombine in the polar night to form molecular oxygen (O2) and ozone (O3). The concentration of ozone gas at night is dependent upon the supply of oxygen and the rate of destruction due to hydrogen radicals.

Hydrogen radicals can only be created by photolysis of water vapour above 25 km. During the northern summer, which takes place when Mars is near aphelion and consequently is further from the Sun than during southern summer, the conditions are such that water vapour is confined below 15 km, with the result that very few radicals are produced there and transported south, where they would destroy the ozone in the atmosphere. In contrast, during the southern summer the upper atmosphere is warmer and the altitude at which the atmosphere becomes saturated with water is above 40 km. The production of hydrogen radicals is increased and more of them flow to the northern winter poles resulting in a rate of ozone destruction about 100 times greater than above the southern pole.

No evidence for a comparable layer of ozone has been found above the northern pole of Mars. This dichotomy is confirmed by the Global Climate Model (developed at the Laboratoire de Météorologie Dynamique (LMD) and LATMOS, France), which predicts no high-altitude ozone layer in the northern polar night region.

For further details, read about A seasonal ozone layer over the Martian south pole.

A glow in the Martian night throws light on atmospheric circulation

A seasonal ozone layer over the Martian south pole