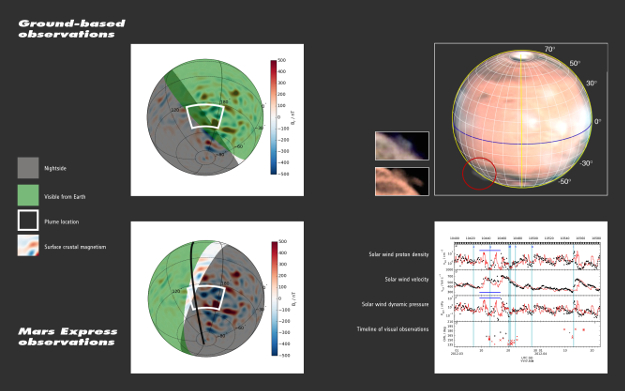 Examples of Earth-based observations of the mysterious plume seen on 21 March 2012 (top right) and of Mars Express solar wind observations during March and April 2012 (bottom right).

On the lower graphic a ground track of Mars Express is shown during a data collection period on 20 March.

The plot on the lower right shows various properties measured by Mars Express, including solar wind proton density (top), velocity (second row) and dynamic pressure (third row). The peaks marked by the horizontal blue line indicate the increase in the solar wind properties as a result of the impact of the coronal mass ejection. The bottom row of the graph shows the timeline of ground-based observations. Positive detections are marked in red, non-detections are marked in black (the size of the symbol indicates the assessed quality of the observation).