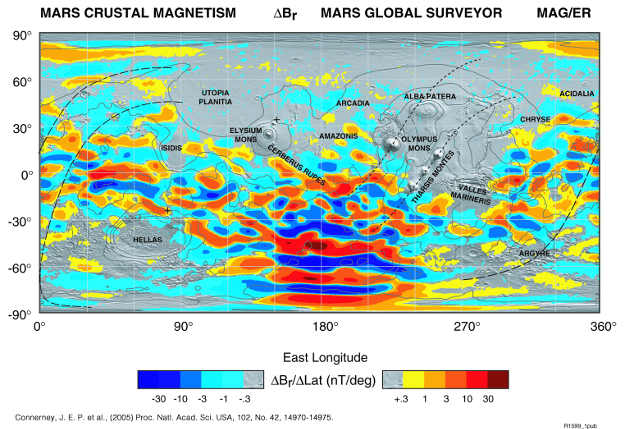 Mars has no global magnetic field, but does have many pockets of strong magnetism locked up in its crust, as indicated in this map, based on measurements made with NASA's Mars Global Surveyor (MGS).

Scientists believe that the young Mars had a sizeable magnetic field, driven by the circulating motion of molten material within its core (known as a planetary dynamo). Although this global field switched off long ago there are still anomalous patches of strong remnant magnetism spread across its surface – these are known as crustal fields.

Further details about this image can be found in Tectonic Implications of Mars crustal magnetism by J.E.P. Connerney and colleagues, published in the Proceedings of the National Academy of Sciences of the United States of America, Vol. 102, no. 42, 2005; doi: 10.1073/pnas.0507469102