Magnetic and plasma environment at Mars

Magnetic and plasma environment at Mars 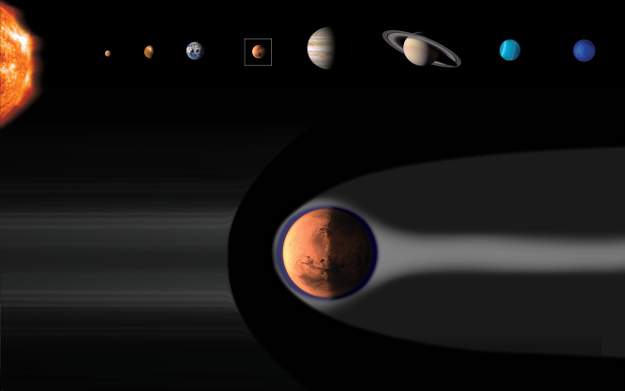 This schematic figure shows the magnetic and plasma environment of Mars.

As the supersonic solar wind – the stream of charged particles (protons and electrons) that emanates from the Sun – reaches the environs of Mars it is deflected and slowed at the bow shock that is formed in front of the planet's exosphere.

The solar wind also carries the solar magnetic field into the Solar System, creating the interplanetary magnetic field (IMF). As the IMF reaches the charged atmosphere (ionosphere, indicated in blue) it piles up and drapes around the planet forming the induced magnetosphere (magnetic pileup region, depicted in dark grey) which partly protects the space around Mars from the direct impact of the solar wind. The ionosphere on the dayside of the planet is much denser thans on the nightside.

Although Mars has no global magnetic field there is ample evidence for patches of strong magnetism locked up within regions of the crust. The crustal magnetic field can strongly change the structure of the magnetic pileup region. In particularly, the IMF can interact with the ionosphere by connecting with field lines coming from some magnetic regions on Mars’ crust. This ‘magnetic reconnection’ allows plasma to travel along those lines and to escape to space, populating a plasma tail (shown in light grey). The escaping plasma causes cavities in the ionosphere that are comparatively lacking in electrons.