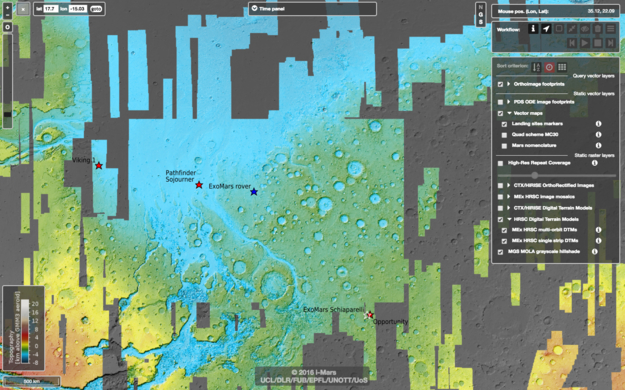 The iMars web-based geographic information system, or iMars webGIS, is an online tool for exploring the wealth of data about Mars collected in past decades.

The iMars webGIS brings together space-based imaging and high-precision 3D data of Mars from Mars Express' High Resolution Stereo Camera (HRSC), which can be displayed alongside a vast quantity of additional datasets and images from other Mars missions. These processed datasets can be used to view the Martian surface across different orbits, missions, and time periods, allowing users to hunt for signs of surface changes, such as landslides, new impact craters, the evolution of the polar caps and frosts, and so on.

Mars' surface is split into 30 quadrangles for easy identification by the United States Geological Survey (USGS); this image shows a patch of Mars' surface known as the MC11 or Oxia Palus quadrangle, which is fully covered by data on the iMars webGIS. This quadrangle contains the candidate landing sites for ESA's ExoMars 2020 rover (marked here by a blue star), and the landing site for NASA's Mars Pathfinder mission in 1997 (marked by a red star). Additional landing sites can be seen in this image, just outside of the quadrangle, also marked by red stars.

The grayscale layer comprises data from the Mars Orbiter Laser Altimeter (MOLA) on NASA's Mars Global Surveyor, on top of which sits a colourful layer comprising single-strip digital terrain model data from Mars Express' High Resolution Stereo Camera (HRSC), colour-coded by topography (blue-greens being depressions, yellows being mid-level, and orange-reds being areas of higher elevation, as indicated by the key in the bottom left).

The webGIS contains multiple controls and dialogue boxes for navigation, allowing users to select image footprints from different instruments, to display or hide features such as quadrant markers, nomenclature labels, and landing sites, to select footprints and fill with desired data, and to filter data by time period.

The iMars webGIS can be accessed here. A video tutorial, made by the iMars team and showing how to use the system, is available here.

Further details about iMars webGIS, and about PSUP–another tool to explore changes on the surface of Mars–can be found here.

New tools for exploring the surface of Mars: the Planetary SUrface Portal (PSUP) and the iMars webGIS