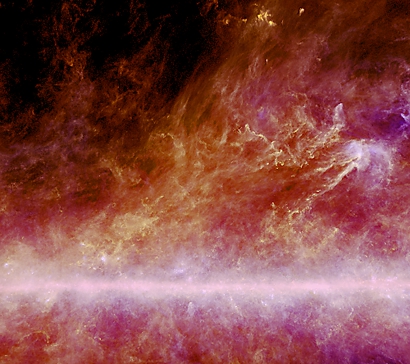 Planck's ability to measure the temperature of the coldest dust particles will provide an important indicator of the physical processes at play in the interstellar medium, and in regions of star formation.

The image above covers a portion of the sky about 55 degrees in total extent. It is a three-colour combination constructed from Planck's two highest frequency channels (557 and 857 GHz, corresponding to wavelengths of 540 and 350 micrometres), and an image at the shorter wavelength of 100 micrometres obtained with the Infrared Astronomical Satellite (IRAS). This combination effectively traces the dust: reddish tones correspond to temperatures as cold as 12 degrees above absolute zero, and whitish tones to significantly warmer ones (of order a few tens of degrees) in regions where massive stars are currently forming. Overall, the image shows local dust structures within 500 light years of the Sun.