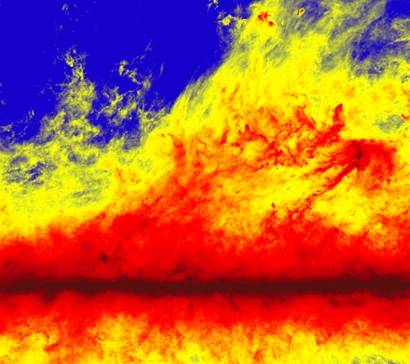 Filamentary structures are apparent at large-scales in this Planck image of a region of the Milky Way.

This Planck image, covering a portion of the sky about 55 degrees in total extent, was obtained by the Planck High Frequency Instrument at a frequency of 857 GHz (corresponding to a wavelength of 350 micrometres). The bright horizontal band corresponds to the plane of our spiral Galaxy, which is seen in cross-section from our vantage point. The colours in the Planck image represent the intensity of heat radiation by dust.