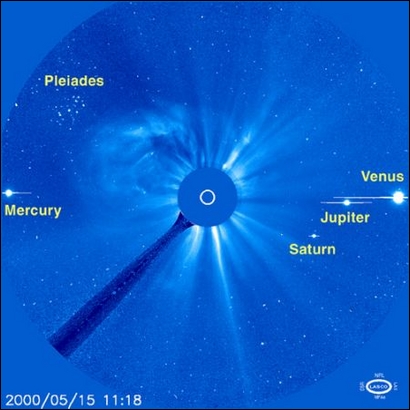 LASCO C3 image showing Jupiter, Saturn, Mercury and Venus simultaneously. The white circle in the middle of the image indicates the size of the Sun, blocked out by an occulting disk to show the surrounding corona. The horizontal lines are not planetary rings, but 'pixel bleeding' resulting from over-exposure. The dark feature pointing towards the lower left corner is the shadow of the pylon holding the occulter. The LASCO C3 instrument on SOHO uses a mask to blot out direct sunlight, and it has a wide enough field of view (15 degrees) to take in four planets (Mercury, Venus, Jupiter, Saturn)in the same picture. Also conspicuous in the picture is a famous star cluster, the Pleiades.
View »
4-Jul-2022 02:29 UT