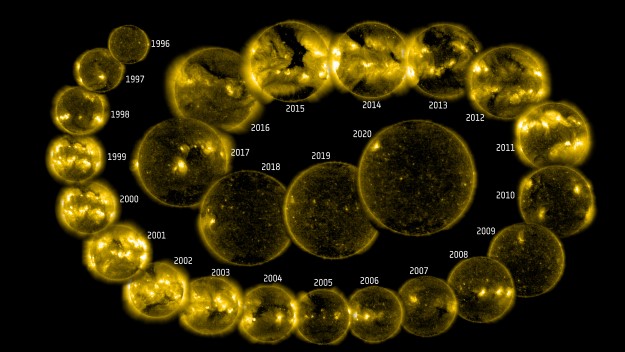 The ESA/NASA Solar and Heliospheric Observatory (SOHO) has been observing the Sun for 25 years. In that time, SOHO has observed two of the Sun's 11-year sunspot cycles, as solar activity waxes and wanes. This montage of 25 images captured by the spacecraft's Extreme Ultraviolet Imaging Telescope provides a snapshot of the changing face of our Sun. The individual images show gas with a temperature of about two million degrees Celsius in the Sun's atmosphere, or corona, which extends millions of kilometres from the Sun. The brightest images occur around the time of solar maximum, when the Sun's magnetic field is strongest and highly dynamic, changing its configuration and releasing energy into space.

View this image as an animated gif​​​​​.