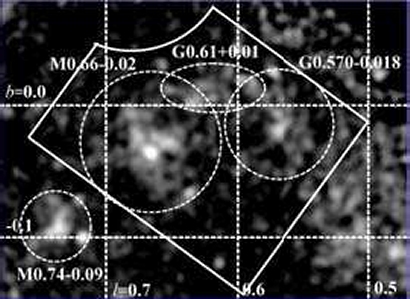 XMM-Newton image in the 6-7 keV band of the area around 0.6° galactic longitude and in the galactic plane. The solid outlined region represents the region studied by Tatsuya Inui et al. (see related publications). It is the overlapping region for all available X-ray archival data of this area from ESA's XMM-Newton X-ray Observatory, Japan's Suzaku and ASCA X-ray satellites and NASA's Chandra X-ray Observatory.

The dashed circles are individual diffuse sources. For two of these, M0.66-0.02 and G0570-0.018, Tatsuya Inui et al. derived the light curve of the 6.4 keV line emission over the period between September 1994 and October 2005 (see related images for the total combined light curve of this region).

Their results indicate that an outburst from Sgr A*, the black hole at the Galactic centre, caused X-ray fluorecense in the two objects some 300 years after the event.

X-ray Echoes of a Past Outburst of Sgr A*