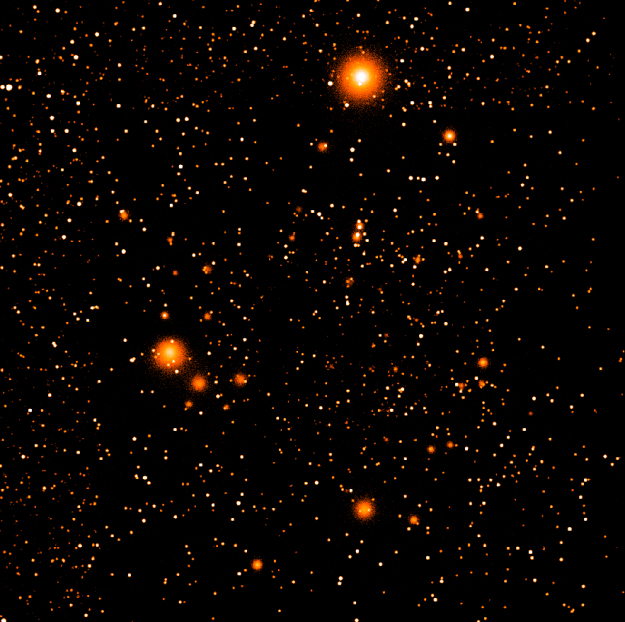 A simulated view of distant X-ray sources – mainly supermassive black holes that are lurking at the core of distant galaxies and actively accreting matter from their surroundings and clusters of galaxies – as will be observed with the Wide Field Imager (WFI) instrument on ESA's future Athena X-ray observatory. Athena, the Advanced Telescope for High-ENergy Astrophysics, is planned for launch in the early 2030s.

The simulated view shows the Chandra Deep Field South, a patch of sky relatively devoid of interstellar matter from our Milky Way, which provides a window onto the distant cosmos. This field has been extensively observed with X-ray observatories such as NASA's Chandra and ESA's XMM-Newton, as well as with ground based telescopes.

Over its nominal lifetime of five years, Athena will observe several hundreds of thousands of accreting supermassive black holes in 'active' galaxies across the history of the Universe. In particular, it will discover over 150 extremely distant ones, at an epoch when the Universe was younger than 10% of its current age (equivalent to redshift z=6 or larger). Many of these ancient active galaxies will have a luminosity comparable to the average of similar objects in the local Universe. Only a few specimens of such high-redshift active galaxies have been identified in even the deepest cosmic surveys performed by current X-ray observatories such as XMM-Newton and Chandra, so Athena's observations will be crucial to study the evolution of these objects throughout cosmic time.

This image was created in June of 2019 using the SIXTE (SImulation of X-ray TElescopes) software package and simulates how Athena's WFI instrument will view the Chandra Deep Field South over a period of 500 000 seconds, equivalent to over 138 hours. It spans 40 arcminutes on each side. Simulated clusters of galaxies have been added to the field to demonstrate Athena's capabilities to discriminate point-like sources like active galaxies from diffuse sources, such as the X-ray emission coming from the hot gas that pervades galaxy clusters.