The two astronomers whom Huygens was named after
Within this article:

Jean-Dominique Cassini (born Gian Domenico Cassini) was interested in astronomy due to his early fascination with astrology. Later in life Jean-Dominique moved to Paris and was to start the long and distinguished dynasty of French astronomers working out of the Paris Observatory. 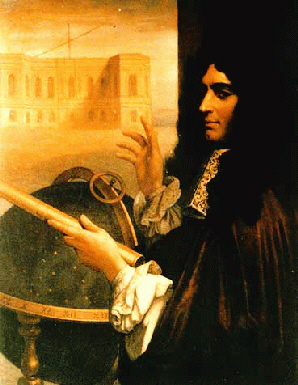 Cassini was born in Perinald, Imperia, Italy, 8 June 1625. Because of his interest in astrology and science this led him on, through his reputation, to be employed by the rich amateur astronomer The Marquis Cornelio Malvasia, in Bologna. Here Cassini was able to indulge his passion for the skies using the Marquis' instruments and he completed his education under the tutelage of Jesuit scientists. Cassini's work was exceptional in its quality and precision and this was the grounding for subsequent academic honors and prestigious positions.

As a young man in his thirties Cassini was working for the Bolognese government and also held the chair at the University of Bologna. His early work included observations of the sun but as he obtained more powerful telescopes he became more interested in the planets. While having bigger and more powerful telescopes, Cassini utilised buildings to house them in, one being the San Petronio Cathedral. The instrument was the so called Meridiana which could compute the exact date for Easter.. In 1666 after observations of Mars, he found the value of 24 hours 40 minutes for Mars's rotational period. We now know it to be 24 hours 37 minutes 22.6 seconds. In 1668 Cassini compiled tables showing the positions of Jupiter's satellites and this was used by the Danish astronomer Ole Rømer to establish that the speed of light is finite. Cassini had formulated the hypothesis of infinite light but later on in his life dismissed this theory.

In 1669 on hearing of Cassini's work and discoveries, King Louis XIV of France, invited him to Paris to join the recently formed Acadèmie Royale des Sciences. In 1671 Cassini held the directorship to the Observatiore de Paris and two years later became a French citizen.

Cassini discovered the Saturnian satellites Lapetus in 1671, Rhea in 1672, and both Tethys and Dione in 1684. In 1675 he discovered, what is now known today as the Cassini Division, Saturns rings split largely into two parts by a narrow gap and that the rings were in fact swarms of tiny moonlets too small to be seen individually. This opinion has been substantiated. 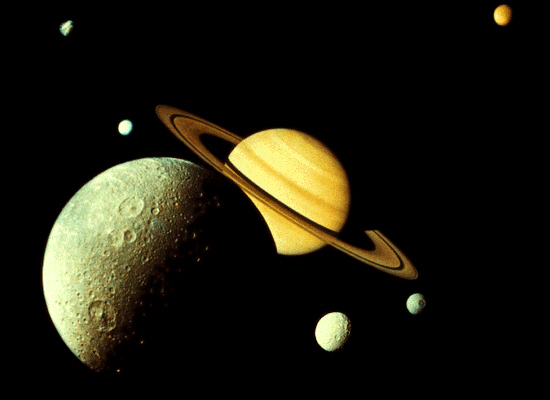 In 1683 after work on zodiacal light he judged that is was of cosmic origin and not a meteorological phenomenon as some had thought. He also, in the same year began the measurement of the arc of the meridian (longitude line) through Paris. He concluded that Earth was somewhat elongated (it is actually somewhat flattened at the poles).

Cassini was a traditionalist by nature and accepted some theories but also dismissed others, which have proved to be true. Undoubtedly though he was among some of the most important astronomers of the 17th and 18th centuries. 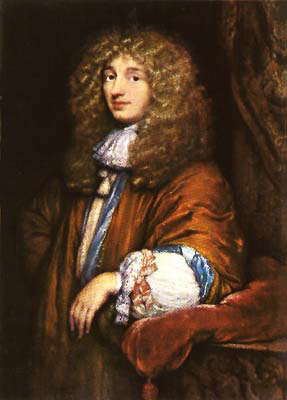 Huygens came from a wealthy and well-connected Dutch family who traditionally was in the diplomatic service to the House of Orange. As a young boy he already showed promise in mathematics and drawing. Descartes (famous statement "I think, therefore I am") used to correspond with Huygens grandfather and impressed with Huygens early efforts at geometry was a great influence on him. In 1645 he went to the University of Leiden to study mathematics and law. Two years later he went to the College of Breda.

In 1655 Huygens visited Paris and because of his family background was able to socialise with the highest intellectually and socially. Huygens had realised how to optimise his telescopes by using a new way of grinding and polishing the lenses and in 1655-56 he discovered Titan, Saturn's major satellite. In 1659 he discovered the true shape of the rings of Saturn. With his interest in the measurement of time he then discovered the pendulum as a regulator of clocks.

In1666 Huygens was one of the founding members of the French Academy of Sciences. He stayed in Paris from 1666-1681 with only occasional visits to Holland. In 1673 Huygens famously published his work Horologium Oscillatorium. This showed among other things the theory on the mathematics of curvatures as well as complete solutions to such problems of dynamics as the derivation of the formula for the time of oscillation of the simple pendulum, the oscillation of a body about a stationary axis, and the laws of centrifugal force for uniform circular motion. Some of the results were given without proof in an appendix, and Huygens' complete proofs were not published until after his death.

Huygens' health was never really very good and he suffered from recurring illnesses, during one of which he returned to Holland to recuperate. During this time the Edict of Nanetes (1685) which granted certain liberties to Protestants which in turn meant him every returning to Paris.

In 1689 Huygens went to London and met Sir Isaac Newton. Huygens had and lectured his own theories on gravitation.

Even though Huygens found it difficult to follow other innovations by people such as Leibriz he is most famous for his work on rotating bodies and his theories on light. Though these theories were largely forgotten until the early 19th century, they are remembered as important and original contribution to science of today.