The Huygens probe separating from the Cassini spacecraft

The Huygens probe separating from the Cassini spacecraft 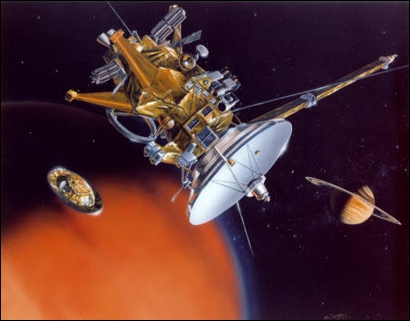 This artist's concept of the Cassini-Huygens orbiter shows the Huygens probe separating to enter Titan's atmosphere. After separation, the probe drifts for about three weeks until reaching its destination, Titan. Equipped with a variety of scientific sensors, the Huygens probe will spend 2-2.5 hours descending through Titan's dense, murky atmosphere of nitrogen and carbon-based molecules, beaming its findings to the distant Cassini orbiter overhead. The probe could continue to relay information for up to 30 minutes after it lands on Titan's frigid surface, after which the orbiter passes beneath the horizon as seen from the probe.
View »
31-Jan-2023 03:27 UT