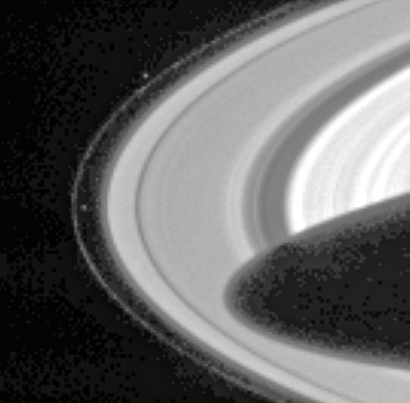 Cassini has finally sighted the F ring shepherding moons, Prometheus and Pandora, whose unpredictable orbits both fascinate imaging scientists and wreak havoc on the F ring. This narrow angle camera image was snapped through the broadband green spectral filter, centered at 568 nanometres, on 10 March 2004 when the spacecraft was 55.5 million kilometres from the planet. Image scale is approximately 333 kilometres per pixel. Contrast has been greatly enhanced, and the image has been magnified to aid visibility of the moons as well as structure in the rings.

Prometheus (102 kilometres across) is visible left of center in the image, interior to the F ring. Pandora (84 kilometres) appears above center, exterior to the ring. The dark shadow cast by the planet stretches more than halfway across the A ring, the outermost main ring. The mottled pattern appearing in the dark regions of the image is 'noise' in the signal recorded by the camera system, which has subsequently been magnified by the image processing.

The F ring is a narrow, ribbon-like structure, with a width seen in this geometry equivalent to a few kilometres. The two small, irregularly shaped moons exert a gravitational influence on particles that make up the ring, confining it and possibly leading to the formation of clumps, strands and other structures observed there. Pandora prevents the F ring from spreading outward and Prometheus is in charge of the inner edge. However, their interaction with the ring is complex and not fully understood. The shepherds are also known to be responsible for many of the observed structure in Saturn's A ring.

The moons, which were discovered in images returned by the Voyager 1 spacecraft, are in chaotic orbits: ie, their orbits can change unpredictably when the moons get very close to each other. This strange behavior was first noticed in ground-based and Hubble Space Telescope observations in 1995, when the rings were seen nearly edge-on from Earth and the usual glare of the rings was reduced, making the satellites more readily visible than usual. Both satellites were observed to be in different places in their orbits than what was expected based on Voyager data.

One of the goals for the Cassini-Huygens mission is to derive more precise orbits for Prometheus and Pandora. Seeing how their orbits change over the duration of the mission will help to determine their masses, which in turn will help constrain models of their interiors and provide a more complete understanding of their effect on the rings.