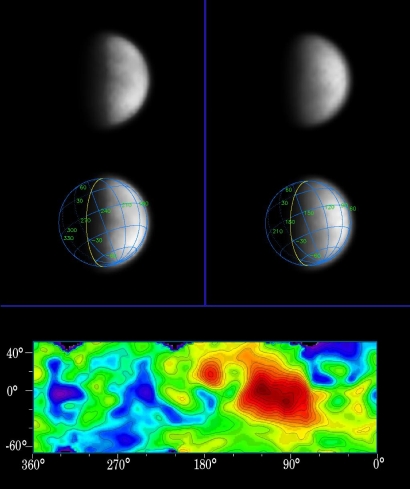 The veils of Saturn's most mysterious moon have begun to lift in Cassini's eagerly awaited first glimpse of the surface of Titan, a world where scientists believe organic matter rains from hazy skies and seas of liquid hydrocarbons dot a frigid surface. Surface features previously observed only from Earth-based telescopes are now visible in images of Titan taken in mid-April by the NASA/ESA/ASI Cassini-Huygens spacecraft through one of the narrow angle camera's spectral filters specifically designed to penetrate the thick atmosphere. The image scale is 230 kilometres (143 miles) per pixel, and it rivals the best Earth-based images.
View »
24-May-2022 21:42 UT