Pandora, Prometheus and the F Ring

Pandora, Prometheus and the F Ring 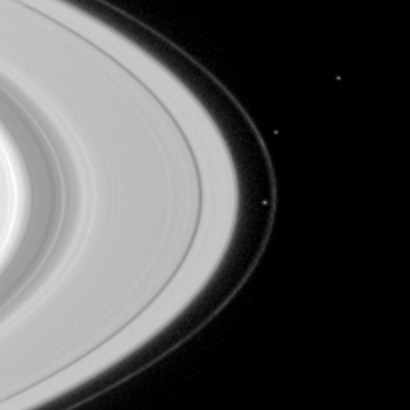 Prometheus and Pandora are seen here shepherding Saturn's narrow F-ring. Prometheus (102 kilometres across) overtakes Pandora (84 kilometres across) in their orbits around Saturn about every twenty-five days. Slightly above the pair and to the right is Epimetheus (116 kilometres across). The image was taken with the narrow angle camera on 1 May 2004 at a distance of 31.4 million kilometres from Saturn. Image scale is 187 kilometres per pixel. The image has been magnified and greatly contrast-enhanced to aid visibility.