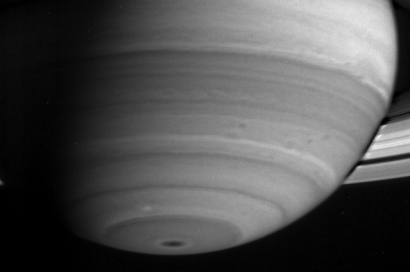 This image shows the delicate banded nature of Saturn's atmosphere. Notable is the small white spot just north of the dark south polar collar. The image was taken with the Cassini narrow angle camera on 4 May 2004, at a distance of 29.7 million kilometres from Saturn. Image scale is 177 kilometres per pixel. The image has been contrast-enhanced to aid visibility.