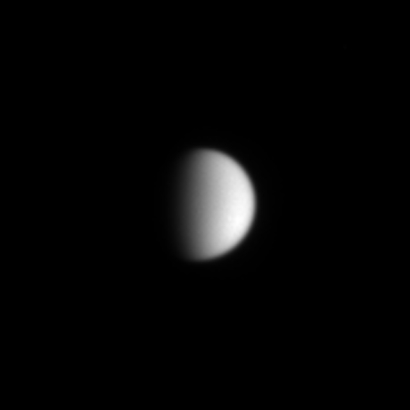 Titan's featureless atmosphere as seen in visible light glares back at the viewer, challenging Cassini and its piggybacked Huygens probe to expose the moon's many secrets. The Huygens probe, built by the European Space Agency, along with Cassini's powerful cameras, will soon penetrate the thick atmospheric haze which enshrouds this moon, which is about the size of Mercury.

The image was taken in visible light with the Cassini spacecraft narrow angle camera on 23 May 2004 at a distance of 21.6 million kilometres from Titan. The image scale is 129 kilometres per pixel. The image was magnified to aid visibility.