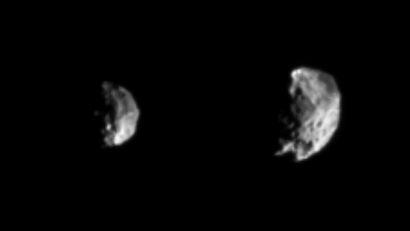 As Cassini sails toward its rendezvous with Phoebe, details on the small, dark moon are coming into view at a dizzying pace. The images shown here were taken only 13 hours apart on 10 June 2004, just one day prior to closest approach, and show a dramatic increase in detail between these two views. On Phoebe, the spin axis points up and approximately 13 degrees to the left of the boundary between day and night. Phoebe completes one rotation about its spin axis in 9 hours and 16 minutes. We are looking at opposite hemispheres in these two views.

A large crater, roughly 50 kilometres across, is visible in the image on the left. The image on the right shows a body heavily pitted with craters of varying sizes, including very large ones, and displaying a substantial amount of variation in surface brightness. Features that appear to be cliffs may in fact be the boundaries between large craters. Despite its exaggerated topography, Phoebe is more round than irregular in shape.

Left to right, the two views were obtained at a phase, or Sun-Phoebe-spacecraft, angle of 87 degrees, and from distances ranging from 956 000 kilometres to 658 000 kilometres. The image scale ranges from 5.7 to 3.9 kilometres per pixel. To aid visibility, the images were magnified three times via linear interpolation; no contrast enhancement was performed.

Phoebe is approximately 220 kilometres wide. Its many secrets await as Cassini draws close to its only flyby with this mysterious outer moon of Saturn at 1:56 pm PDT on 11 June 2004.