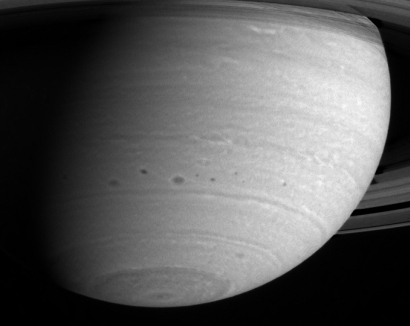 This image shows several dark storms confined to a region below 30 degrees south latitude in Saturn's atmosphere. This turbulent region has produced quite a few storms during Cassini's approach to Saturn, including some that have merged. A number of other interesting smaller-scale atmospheric features are also becoming visible.

The image was taken with the Cassini spacecraft narrow angle camera on 11 May 2004 from a distance of 26.4 million kilometres from Saturn through a filter centred at 750 nanometres. The image scale is 157 kilometres per pixel. Contrast in the image was enhanced to aid visibility.