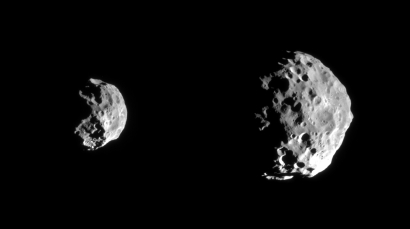 Early images returned from the first detailed reconnaissance of Saturn's small outer moon, Phoebe, show breathtaking details in the moon's pockmarked surface that already have imaging scientists puzzling over the body's history. The images are only a preview of what to expect from the high-resolution images to be examined later today, which will show details about 10 times smaller.

Phoebe has revealed itself to be a rugged, heavily cratered body, with overlapping craters of varying sizes. This morphology suggests an old surface. There are apparently many craters smaller than 1 km, indicating that projectiles probably smaller than 100 metres once pummelled Phoebe. Whether these objects were cometary or asteroidal in origin, or were the debris that resulted from impacts on other bodies within the Saturn system, is hotly debated. There is also variation in surface brightness across the body.

In the first image (at left) in which Phoebe looks somewhat like a sideways skull, the large crater near the bottom displays a complex and rugged interior. The lower right hand part of Phoebe appears to be covered by bright wispy material.

The second, higher resolution image further reveals the moon's battered surface, including a crater near the right hand edge with bright rays that extend outward from its centre. This suggests that dark material coats the outside. Features reminiscent of those seen on the Martian moon Phobos - such as linear grooves - are faintly visible in the upper part of this image. There are suggestions of linear ridges or grooves and of chains of craters, perhaps radial to a large crater just hidden on the un-illuminated region in the upper left.

Left to right, the two views were obtained at phase, or Sun-Phoebe-spacecraft, angles of approximately 86 degrees, and from distances ranging from 143 068 kilometres to 77 441 kilometres; for reference, Cassini's closest approach to Phoebe was approximately 2068 kilometres. The image scale ranges from 0.86 to 0.46 kilometres per pixel. No enhancement of any kind has been performed on the images.