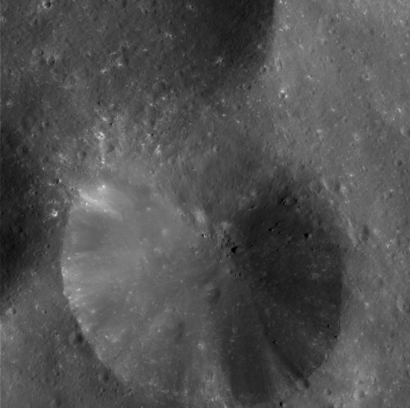 This astonishing high-resolution image of Phoebe's pitted surface taken very near closest approach shows a 13-kilometre diameter crater with a debris-covered floor. Part of another crater of similar size is visible at left, as is part of a larger crater at top and many scattered smaller craters. The radial streaks in the crater are due to downslope movements of loose fragments from impact ejecta. Also seen are boulders ranging from about 50 to 300 metres in diameter. The building-sized rocks may have been excavated by large impacts, perhaps from some other region of Phoebe rather than the craters seen here. There is no visible evidence for layering of ice and regolith or a hardened crust in this region, as on other parts of this moon.

Some of the relatively bright spots are from small impacts that excavated bright material from beneath the dark surface. Images like this provide information about impact and regolith processes on Phoebe.

This image was obtained at a phase, or Sun-Phoebe-spacecraft, angle of 78 degrees, and from a distance of 11 918 kilometres. The image scale is approximately 18.5 metres per pixel. The illumination is from the right. No enhancement was performed on this image.