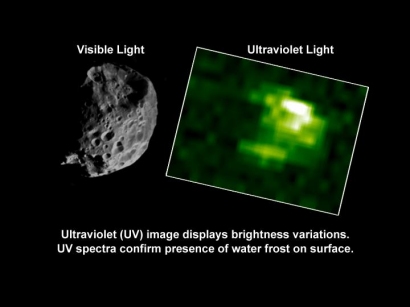 On the right, the ultraviolet image of Saturn's moon Phoebe, taken from a distance of 31 000 kilometres shows an irregular surface and bright crater region (white area). The bright areas indicate water frost on Phoebe's surface. The image was taken by Cassini's ultraviolet imaging spectrograph during the spacecraft's closest approach to Phoebe, on 11 June 2004. The large crater shows clearly in the image on the left.