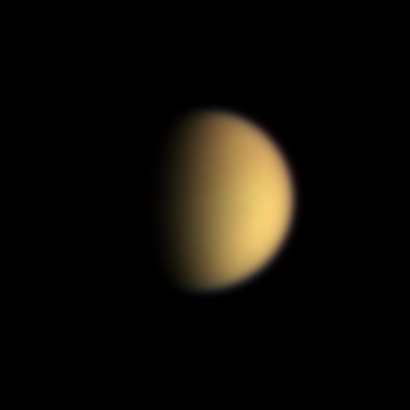 Despite the views of Titan's surface that Cassini is able to provide, the moon remains inscrutable to the human eye. In true colour images that are taken in the visible wavelengths, Titan's photochemical smog, rich in organic material, gives the moon a smooth featureless orange glow.

The Cassini orbiter carries specially-designed spectral filters that can pierce Titan's veil. Its piggybacked Huygens probe will descend through the atmosphere in early 2005, giving an up-close-and-personal look at this mysterious orange moon.

Images taken with the narrow angle camera using red, green and blue spectral filters were combined to create this colour view. The images were obtained at a Sun-Titan-spacecraft, or phase, angle of 67 degrees and from a distance of approximately 13.1 million kilometres on 10 June 2004. Image scale is approximately 79 kilometres per pixel.