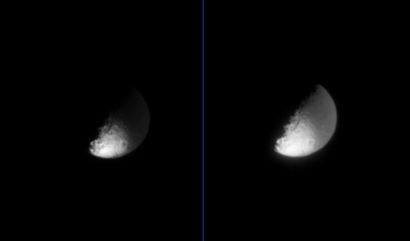 The dark material that coats one hemisphere of Saturn's moon Iapetus is very dark, as these two processed views of the same image demonstrate.

The image was taken in visible light, with the Cassini spacecraft narrow angle camera on 19 July 2004, from a distance of 2.9 million kilometres from Iapetus, and at a Sun-Iapetus-spacecraft, or phase angle of 89 degrees. The image scale is 17 kilometres per pixel. The image has been magnified by a factor of four to aid visibility.