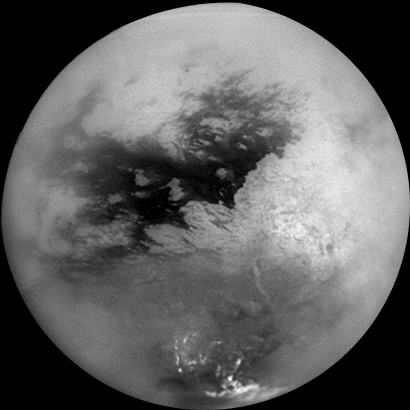 A mosaic of nine processed images recently acquired during Cassini's first very close flyby of Saturn's moon Titan on 26 October 2004, constitutes the most detailed full-disc view of the mysterious moon.

The view is centred on 15 degrees south latitude, and 156 degrees west longitude. Brightness variations across the surface and bright clouds near the south pole are easily seen.

The images that comprise the mosaic have been processed to reduce the effects of the atmosphere and to sharpen surface features. The mosaic has been trimmed to show only the illuminated surface and not the atmosphere above the edge of the moon. The Sun was behind Cassini, so nearly the full disc is illuminated. Pixel scales of the composite images vary from 2 to 4 kilometres per pixel.

The brighter region on the right side and equatorial region is named Xanadu Regio. Scientists are actively debating what processes may have created the bizarre surface brightness patterns seen here. The images hint at a young surface with no obvious craters. However, the exact nature of that activity, whether tectonic, wind-blown, fluvial, marine or volcanic is still to be determined. The images comprising this mosaic were acquired from distances ranging from 650 000 kilometres to 300 000 kilometres.