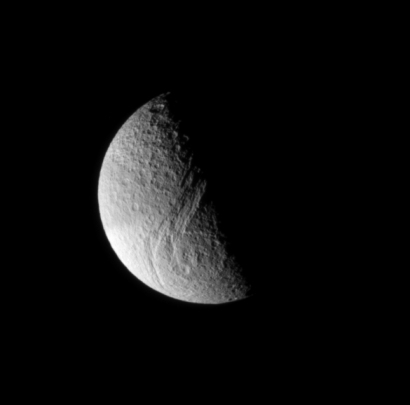 This dazzling view of Tethys shows the tremendous rift called Ithaca Chasma, which is 100 kilometres wide in places, and runs nearly three-fourths of the way around the icy moon. Tethys is 1060 kilometres across.

Adjacent to the great Chasma is a large multi-ring impact basin with a diameter of about 300 kilometres. The inner ring of the basin is about 130 kilometres in diameter. The moon's heavily cratered face is indicative of an ancient surface.

This view shows principally the Saturn-facing hemisphere of Tethys. The image was taken in visible light with the Cassini spacecraft narrow angle camera on 15 December 2004, at a distance of approximately 560 000 kilometres from Tethys and at a Sun-Tethys-spacecraft, or phase, angle of 91 degrees. The image scale is about 3 kilometres per pixel.