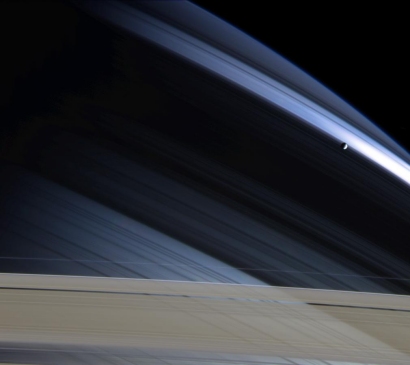 In this portrait, Saturn's lonely moon Mimas is seen against the cool, blue-streaked backdrop of Saturn's northern hemisphere. The part of the atmosphere seen here appears darker and more bluish than the warm brown and gold hues seen in Cassini images of the southern hemisphere, due to preferential scattering of blue wavelengths by the cloud-free upper atmosphere.

The bright blue swath near Mimas (398 kilometres across) is created by sunlight passing through the Cassini division (4800 kilometres wide). The rightmost part of this distinctive feature is slightly overexposed and therefore bright white in this image. Shadows of several thin ringlets within the division can be seen here as well.

The dark band that stretches across the center of the image is the shadow of Saturn's B ring, the densest of the main rings. Part of the actual Cassini division appears at the bottom, along with the A ring and the narrow, outer F ring. The A ring is transparent enough that, from this viewing angle, the atmosphere and threadlike shadows cast by the inner C ring are visible through it.

Images taken with red, green and blue filters were combined to create this colour view. The images were obtained with the Cassini spacecraft narrow angle camera on 7 November 2004, at a distance of 3.7 million kilometres from Saturn. The image scale is 22 kilometres per pixel.