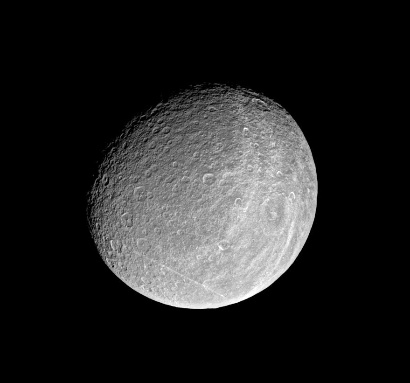 This view of the trailing hemisphere of Saturn's moon Rhea shows the region's bright wispy markings, but also shows off the moon's craters in great detail. Of particular interest to imaging scientists is the distribution and orientation of the many craters with polygonal rims. These are craters with rough, angular shapes, rather than smooth, circular ones.

The image was taken in visible light with the Cassini spacecraft narrow angle camera on 16 January 2005, at a distance of approximately 500 000 kilometres from Rhea and at a Sun-Rhea-spacecraft, or phase, angle of 35°. Resolution in the original image was about 3 kilometres per pixel. The image has been rotated so that north on Rhea is up. Contrast was enhanced and the image was magnified by a factor of two to aid visibility.